Since its beginning in 1907, 29 landowners within The Little River Drainage District have served on its Board of Supervisors, and the tenures of some have spanned several decades. The District also has had 6 Chief Engineers, 7 Secretary/Treasurers, and 6 Attorneys since it was incorporated. Paul T. Combs is President of Combs Farming Company and Sunrise Land Company, family-owned farm companies with holdings in Dunklin and Pemiscot Counties in Missouri. Crops produced on these farms include rice, soybeans, corn, cotton, and wheat. He is also President of Baker Implement Company, a family-owned retail farm equipment dealership with eleven locations in Southeast Missouri and Northeast Arkansas.

Mr. Combs is a Director of First Missouri Bank of SEMO. He is a past member of the Board of Directors and Executive Committee of the USA Rice Federation and previously served as Chairman of the USA Rice Producers Group. Mr. Combs has provided testimony on farm policy numerous times before the Agriculture committees of the U.S. Senate .of the Greater St. Louis Area Council Boy Scouts of America. Mr. Combs served two terms as a Director of the Federal Reserve Bank of St. Louis from 2005-2010. In 1995, Missouri Governor Carnahan appointed Mr. Combs to a six-year term on the Board of Curators of the University of Missouri System. During his tenure on the Board of Curators, Mr. Combs served as both Vice President and President of the Board.

Mr. Combs earned his B.S. in Accountancy from the University of Missouri—Columbia in 1987 and is a Certified Public Accountant. Prior to joining his family business, Mr. Combs was a tax associate at the Price Waterhouse accounting firm in St. Louis.

Mr. Combs and his wife Holly have two grown children, Meredith and Hayden, and make their home in Kennett, Missouri and Memphis, Tennessee. A.C. Riley James succeeds his grandfather, A.C. (Dub) Riley, as a Supervisor on the LRDD Board of Supervisors since 2001.

Mr. James of A.C. Riley Cotton Co. and his family own and manage cotton gins and grain elevators in New Madrid. Mr. James, who grows cotton and soybeans, is a great advocate for the Missouri cotton industry. He has served on the board of the Missouri Cotton Growers’ Organization and was president of the Southern Cotton Ginners Association in 2014.

Currently Mr. James is the President of the St. John Levee & Drainage District of Missouri.

The town historian traces the James’ farming lineage seven generations back. He grew up in the cotton fields and the cotton gin. After graduating from Mississippi State University, Riley returned to the family farm to work alongside his grandfather in the cotton gin. In 2005, he received his MBA from Washington University in St. Louis. 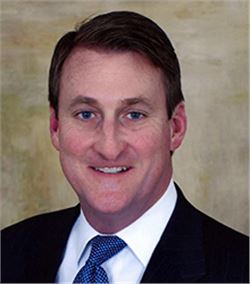 Gaylon Lawrence, Jr. is the owner of a diversified collection of businesses broadly referred to as The Lawrence Group. His interests include holdings in agriculture, banking, commercial real estate, and the HVAC industry. The Lawrence Group’s agricultural operations are vertically integrated, with direct involvement in land ownership and management, farming, crop handling/processing/marketing, and the retail agricultural input sector. The Group focuses on cotton, rice and citrus crops grown on a land base spanning from the bootheel of Missouri to south Florida.

In 2010, The Lawrence Group acquired the historic Lee Wilson Company, including 30,000 acres of farmland surrounding Wilson, Arkansas and substantially all of the infrastructure of the town itself. Since then, the farm has grown to 42,000 acres, and Mr. Lawrence has set about creating a new vision for Wilson’s future. His plan for the revitalization of the former “company town” is centered around innovation, sustainable renewal and strong community. 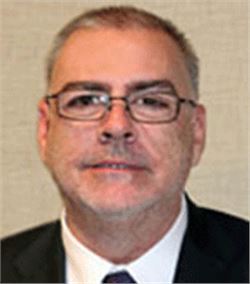 Mr. Timothy W. Martin is the president of Martin Rice Company, Martin Grain Company and Marco, Inc. With his brothers, he farms and manages more than 7,000 acres of rice-growing and row crop land in southeast Missouri. In 2010, Martin Rice Company received the Governor’s Award for Agricultural Achievement. In 2016, Martin Rice Company received the Missouri Department of Agriculture, Exporter of the Year award. Along with being a Board Supervisor of The Little River Drainage District, Mr. Martin is an Appointed Commissioner of the Missouri State Soil and Water Districts Commission and is a member of the Elk Township Board in Stoddard County. 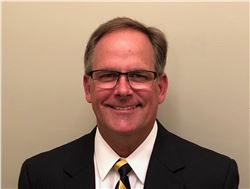 Edward E. Dement owns Dement Farms, Inc. in Sikeston, Missouri where he farms and manages 4,000+ acres of row crops within 3 different counties.  Edward started his farming career with his father, Gene Dement in 1983.  Edward Dement has a long history of involvement with agricultural & community organizations.  He is currently Chairman of Sikeston Special Road District, Vice Chairman of Richland Drainage District, Executive and Finance Committee Member of Missouri Delta Medical Center Board of Directors, and Deacon of First Christian Church.

Mr. Dement graduated from the University of Missouri-Columbia in 1983 with a Bachelor of Science Degree in Agricultural Economics – Honors Scholar.

Mr. Dement and his wife Kaye have two grown children. 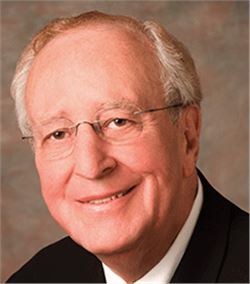 E.B. Gee, Jr, and his family and his father before him were involved in agriculture in southeast Missouri starting in 1920. The Gee family operated farm lands in New Madrid and Dunklin County, Missouri, as well as grain elevators. They had a large seed production, processing and sales operation in wheat and soy bean seeds for many years, as well as being involved in other agriculture endeavors.

To highlight his deep interest in flood control and navigation, Mr. Gee served on the Executive Committee of the Mississippi Valley Flood Control Association. He was awarded the Outstanding Civilian Service Medal by General Joe Ballard who was the Chief of Engineers of the United State Army Corps of Engineers.

Mr. Gee graduated from the University of Arkansas with a degree in Business Administration. While there he played on the Golf team in 1952, 1953, and 1954. He was captain of the Golf Team in 1954.

Mr. Gee had a great interest in Golf. He won several national and regional golf tournaments. He served as president of The Arkansas State Golf Association in two different decades. He served as a member of the Senior Amateur Championship Committee of the United States Golf Association for nineteen years. Mr. Gee was inducted into the Arkansas Golf Hall of Fame in 2007.

E.B. Gee, Jr. and his wife Rosemary were married in 1955. In March 2017 they celebrated their 62nd anniversary. They have four children, six grandchildren, and seven great grandchildren. 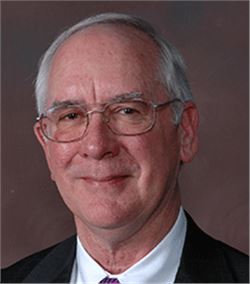 Mr. Petersen farmed and owned many acres of land in southeast Missouri raising row crops, primarily cotton. He owned and operated Citizen’s Cotton Gin in Wardell, Missouri for many years.

Currently he serves on the First State Bank Board of Directors since 1981 and in Wardell he is known as a Community Leader.

He is married to Mrs. Jackey Petersen and has two children, Eric and Cameron. 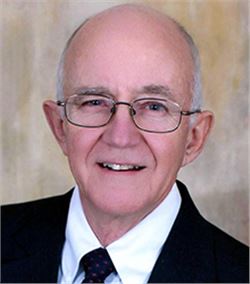 Dr. Sam M. Hunter was born in Cape Girardeau, Missouri. He attended Loyola University in New Orleans, Louisiana, and the University of Missouri, Columbia, where he graduated with a degree in Doctor of Veterinary Medicine in 1970. That same year he established the North Ridge Veterinary Hospital in Sikeston, Missouri, which has since expanded into a multi-doctor practice with branches in New Madrid and Charleston, Missouri.

Dr. Hunter and his wife Erica reside on a farm just north of Sikeston, where they raised their four children. In addition to practicing veterinary medicine, he serves as trustee and manager of his family’s farmland, where the crops grown include corn, cotton, rice, soybeans and winter wheat.

Dr. Hunter has served as:

Dr. Hunter was appointed by former Governor Matt Blunt and confirmed by Senate as a Member of the Missouri Clean Water Commission from 2007-2013 and was President during 2012 and 2013.  In 2007 the Sikeston Area Chamber of Commerce named him their Agribusiness Man of the Year. 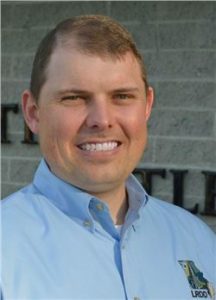 W. Dustin Boatwright, a lifelong resident of southeast Missouri and a 3rd generation employee of The Little River Drainage District. He spent much of his childhood and adolescent years working with his father and grandfather on heavy civil construction projects. Mr. Boatwright’s career with The Little River Drainage District began in 2001 where he worked as a shop mechanic and machine operator in the southern portion of the District. In 2009 he began working full time as the Assistant Engineer at the headquarter office in Cape Girardeau, Missouri. He was promoted to Chief Engineer in 2014 and Executive Vice President in 2015.

Mr. Boatwright is registered in the State of Missouri as a Professional Engineer and a Licensed Surveyor In-Training. He currently serves as a Regional Engineer for the Mississippi Valley Flood Control Association and serves on the Board of Directors for the National Waterways Conference.

Mr. Boatwright and his wife Amanda have two young daughters, Emersyn and Westyn, and reside in Kelso, Missouri. 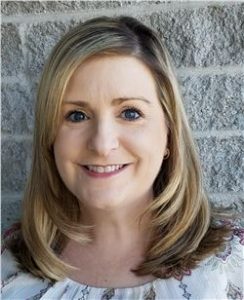 Stephanie and her husband Tim live in Scott City and have 2 grown daughters, Tori and Lindsey, and 2 grandchildren, Liam and Rowan. She has served the District since 2006. 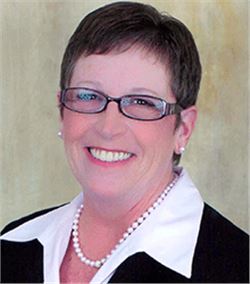 Belinda and her husband Rick live in Jackson, Missouri and have 2 grown children, Alicia and Chris, 6 grandchildren, Lauren, Timothy, Hannah, Rylie, Marissa and Amelia and 2 great-grandchildren, Jackson and Elizabeth. She has served the District since 2008. 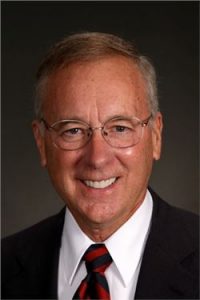 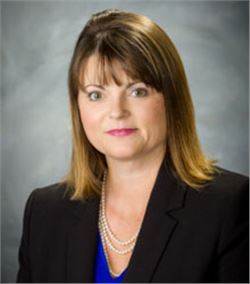